Two distinguished British authors, Henry Fothringham, OBE, and Charles Kinder Bradbury,  have just released their beautiful coffee table book, Stewart Heritage.  The book devotes a page to each of several dozen famous and influential Stewarts.  One of the Stewarts they profile is our focus in these pages:  George R. Stewart.

This is the third recent work honoring Stewart and his work.  There was an essay in the literary magazine of the Chicago Tribune, “George R. Stewart: Unrestrained by literary borders,” the several pages devoted to Stewart’s Storm in  Snowbound,  Mark McLaughlin’s just-released book about the largest storms recorded in the Sierra Nevada, the fine interpretive sign at Donner Summit so ably designed and place by Bill Oudegeest of the Donner Summit Historical Society (followed by several articles in the Society’s magazine), the Berkeley ePlaque edited and published by Robert Kehlmann and his stalwart colleagues; and now this fine one-page essay which succinctly summarizes Stewart’s life and work.

Although I can’t reproduce the entire GRS page from Stewart Heritage for reasons of copyright, I can post a portion here to give readers the chance to see the quality of the book and the George R. Stewart entry. 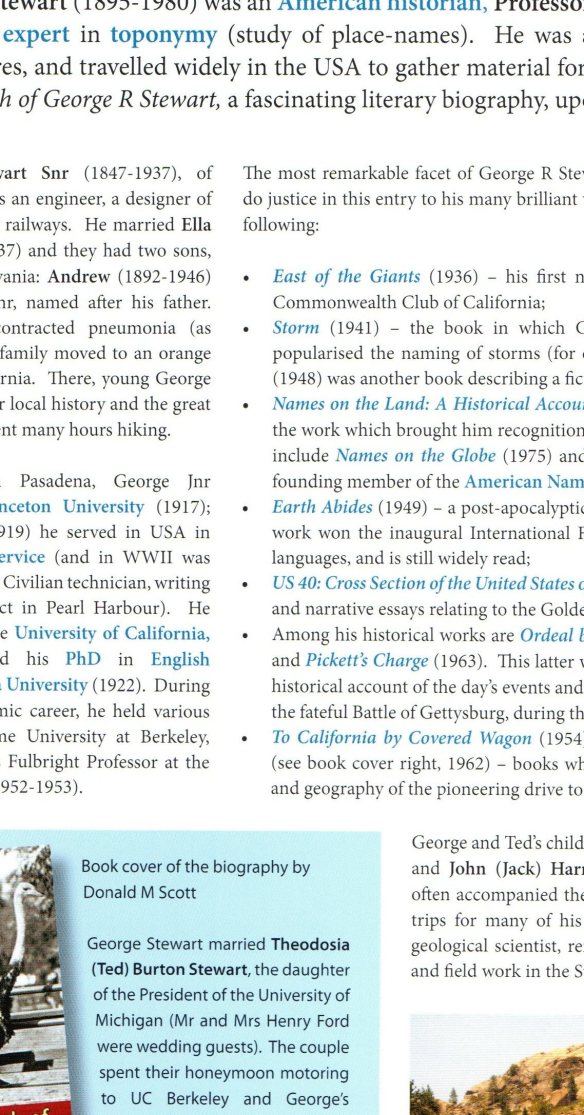 There is clearly a continuing interest in George R. Stewart and his work.   The new, reduced price on the GRS biography and the planned mini-series of Earth Abides will increase that interest.

This weblog is not designed as a marketing tool.  But when something  exceptional  related to George R. Stewart comes along, I’ll always share it with you.  If you are a Stewart, or know a Stewart, or a passionate fan of George R. Stewart and his work, you might consider Stewart Heritage (which I understand was printed in a limited edition).

Post Script.  Having had the chance to review the book in more depth, I find it rich in history across disciplines, across borders, even across racial lines.  There are entries which sweep the Earth from Panamint City near Trona, California – founded by stage robbers who discovered silver there – to Brittany (“Little Britain”) and a tussle there between Satan and Saint George over Mont St. Michel – to Hollywood and James Stewart – and on and on.  Disciplines include science and engineering – the authors have expertise in chemistry and metallurgy – painting, music, film, sport, military accomplishments, academia, politics, law – think Justice Potter Stewart – and, of course, writing.  It is a fascinating read.