In William Least Heat Moon’s American classic, Blue Highways, Least Heat Moon explains that one of the goals of his 11,000 mile American journey was to visit towns with unusual names.  Since another of his goals was to follow the old U.S. Highways, I guessed he knew the work of  George R. Stewart.  So when I met him, I said, “You’ve been influenced by George R. Stewart.”  He looked up from the desk where he was signing books and said, “Yes.  Profoundly.  How did you know?”  “Because I’m a scholar of GRS’s works, and Blue Highways is clearly influenced by U. S. 40, Names On The Land, and American Place Names.”

American Place Names is one of the last books – all about names – that Stewart wrote before his death in 1980.  He had a fascination with names, of place particularly, and with what names tell us about the people who do the naming.  Names on the Land is his masterwork, a history of American place naming – which Stewart considered untranslatable since it included so many unique American references.  (But that’s not stopping Scholar Junlin Pan, who, following a request from one of the most distinguished publishing houses in China, is well along in her translation – with a little help from someone who knows American history and can give some sense of meanings of American place names.)

Researching  Names on the Land, Stewart had built a huge file of the history of how places were named, far more than could be used in the book.  So now, near the end of his work, he decided to publish those mini-histories of the names.  Released in 1970 by Oxford University Press, American Place Names was described as “an instant classic.”

The book contains the meaning and brief history of approximately 12,000 names of places from coast to coast and border to border, in its  500 plus pages.  Names like Arroyo Grande – Big Gulch or Big Creek or Big Ditch, named tautologically – Arroyo Grande Creek means Big Creek Creek – or for some prominent local feature.  Pismo, as in Pismo Beach, means tar in Chumash, since the area is filled with tar seeps (and now oil fields and a refinery).  Bug Scuffle warns the visitor that he or she should expect to spend time fighting off bedbugs or other members of the insect world.  Likely was named because the locals believed it was unlikely that any other town with a post office would have that name.  Nameless, a humorous name for a small feature or town;  Accident because somebody surveyed some land by accident; Los Angeles, an Anglo contraction of the Spanish name “Nuestra Senora de los Angeles de Porciuncula; Angels Camp, for founder George Angel.  And so on, and so on.

The book is a wonderful read….the type of book to keep by the bed so you can browse through it before sleep and thus perchance dream of all those exotic places on American roads and trails that you hope to see someday.  I also suggest to friends that they keep a copy in their car, so that when they’re on a long trip, they can find the meaning of interesting names of the places they pass through-  Devil’s Churn, say, or Ekalaka, or Deer Lodge, or Ten Sleep, or Monticello, or Yosemite.

William Least Heat Moon visited or acknowledged several places with unusual names on his great odyssey – Dime Box, Texas; Nameless, Tennessee; Igo and Ono, California.  His chapter on Nameless is one of the great pieces of American writing, which everyone should read.

If you’re going to visit these places, you’d better hurry.  The  bowdlerizers are hard at work,  removing some of the most interesting and important names from the map. Nellie’s Nipple may go; Shit House Mountain has probably gone.   In some instances, the names are offensive; but they reflect a part or our history, and the censors should not be allowed to erase that from the map.  But they’re in high dudgeon now, and have the ear – or some appendage – of the establishment, so much of our language is at the risk, including our place names.  Visit while you can.  And in preparation, read Stewart’s book.

The book is available used; check with your local bookseller to order a copy.

Thanks to several sponsors and the hard work of Bill Oudegeest of the Donner Summit Historical Society, the George R. Stewart interpretive sign, which will be part of the Twenty-Mile Museum, has gone to the manufacturer.  The base will be installed soon; the sign, late next spring when the Pass opens.  Here’s the final (or nearly final) sign:

Bill chose the location with care, and it’s perfect:  A parking area which overlooks Donner Lake, Donner Peak, the historic “Rainbow Bridge” on U.S. 40, and the Summit of Donner Pass – which would have been the route of the first covered wagons over the Pass.

Here’s a photo from Bill, showing where the sign will be placed: 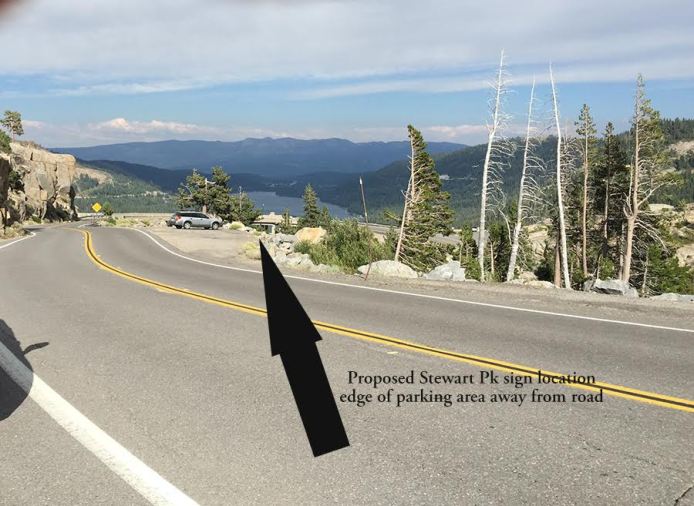 Stand by the sign, face northwest across old U.S. 40 to look directly at George R. Stewart Peak.  Here’s a photo from a kind soul who posted it to Google Maps:

The parking area is close to the Pacific Crest Trail, too,  The PCT crosses U.S. 40 not far beyond the left (west) side of this photo.  Here’s a map from Bill which shows the PCT crossing – yellow arrow – in relation to the sign location at the parking lot – black arrow.

It’s a short walk – always face traffic! – to the Trail Crossing; from there, it’s a short hike and scramble to the summit of George R. Stewart Peak.  The directions are on the new sign.

Let’s all hope to meet there some day in the summery future, and do the hike.  Afterward, we can have a picnic – Ted (Theodosia) Stewart loved picnics – and read from Stewart’s books.

Thanks to Bill Oudegeest, and the sponsors who made this possible:

Looking over the various pages on the Historical Society’s website, a few weeks ago,  I found a link to their Newsletters.  Since there was none with an article about GRS, I contacted the Editor, Bill Oudegeest,to volunteer to write one.

After receiving the first draft, Bill suggested the Society would be interested in placing a GRS interpretive sign along the old highway, if financial sponsorship and help with the sign’s research and writing were available.  I sent in some photos and text, posted a message to the GRS group, and soon the design was underway, the cost fully sponsored.  Thanks to Brian and Beth, Steve and Carol, Bob and Sandra, Paul F., Denise and Barney, John and Angela, Willie, Joyce, and Alan, the sign will be installed next spring. Caltrans has approved the sign’s location; Bill has done a fine layout.   The sign will be installed very near the Historic U.S. 40 access point for the Pacific Crest Trail – which is also the closest access to George R. Stewart Peak.  This means that hundreds of hikers on the PCT, day hikers in the Donner Summit area, drivers sauntering over Historic U.S. 40 (the subject of a legendary book by GRS), or anyone who visits the Society’s small museum in Soda Springs will learn about George R. Stewart and his remarkable books.  Hopefully, many of those people will take the short side-trail and scramble to the top of George R. Stewart Peak (named in honor of GRS by the Board of Geographic Names).  The round trip from Historic U.S. 40 is only about 3 miles.

Those interested in George R. Stewart and the Donner Summit area owe thanks to all those involved in this successful project.  The Donner Summit Historical Society is always looking for members; one way to show your thanks is to join!

Below is the current draft of the GRS Interpretive Sign.  It will be placed next spring, after the old road reopens.  Some of us are already dreaming about a dedication celebration.  Stay tuned.

In 1953, George R. Stewart published his ground-breaking U. S. 40 — a book which used photography and text to interpret the transcontinental geography of the United States from U.S. 40, then the major east-west highway.

In 1983, Thomas and Geraldine published U.S. 40 Today.  The Vales traveled Stewart’s route, re-photographing most of the sites from the original book, and describing the changes in the 30 years since the original was published.

Now, leading U.S. 40 scholar Frank X. Brusca is rephotographing Stewart’s sites as they appear today.  Last week, I was honored to accompany him on part of his re-photography project.

We spent the first two days at the Bancroft Library, researching Stewart’s papers, and the first three nights with John and Angela Lucia at their historic home in Sacramento. 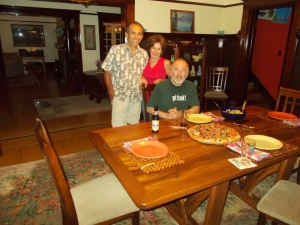 The food and the accommodations were excellent,  and the conversation went on into the night.  John and Angela are also roadies, and “car guys,” so we had much to discuss – like John’s interest in U.S. 50, and the Lucias’ 1950 Ford Woodie (which is one of the best woodies in the country). 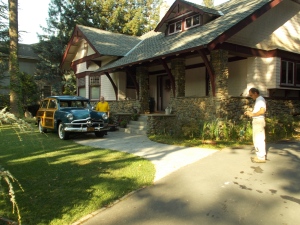 Then Frank and I headed east on I 80, which parallels or covers historic U.S. 40.  Our first stop, thanks to Dispatcher Maria and Sergeant Dave Brown of the California Highway Patrol, was productive.  Sgt. Brown took us to two of the sites in his patrol car, sites not safe to photograph now unless there’s CHP support, so we were glad for the  help.  Sgt. Brown’s also an amateur historian from the Dutch Flat area, where George R. Stewart had a summer cabin, so he was interested in Stewart.

We spent the night in Truckee; then continued east to Wendover, Utah, photographing along the way.  Highlights of the photography were Donner Pass, Emigrant Gap, Wendover – and the most difficult photography of the trip – from Black Rock, near the Great Salt Lake.  The steep Rock was challenging to climb, but Frank made it to the top and took his photos of the scene. 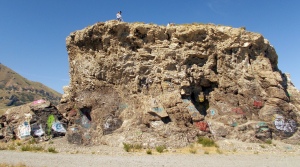 I stayed in Salt Lake City that night, while Frank headed east to finish his work.  My plan was to take the Amtrak train west to Sacramento after visiting family in the area.  I eventually did so – after a 2.5 day delay.  The train delay and the poor attitude of Amtrak’s customer “service” were good reminders of the enjoyable freedom of auto highways, like U.S. 40.

Frank plans to publish a new version of U.S. 40, using the photographs from this and other trips.  His version will include color images and 360 degree panoramas, which will make Frank’s publication a technological leap forward from both the original work and the Vales’ classic re-visiting.

If you want to learn more about Frank Brusca and his work on U.S. 40,  read William Least-Heat Moon’s best-selling ROADS TO QUOZ, which has four chapters about Frank, George R. Stewart, and U. S. 40.  Or visit Frank’s excellent U.S. 40/National Road website.

Was his trip a success? The photo says it all. 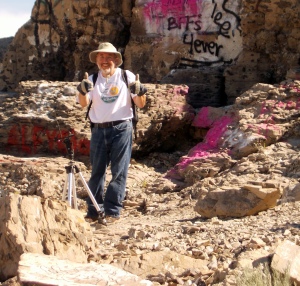