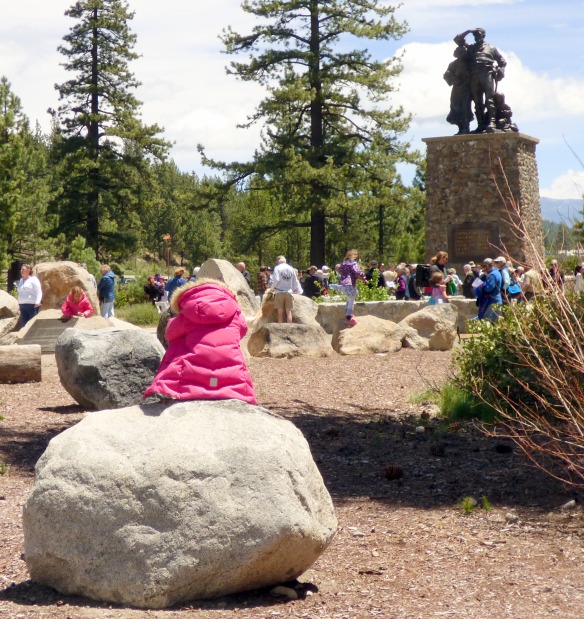 Stewart was a professor of English at the University of California, Berkeley.  He was  interested in the geography, history, and field exploration of California and the West.  When a new Head of the English Department took a disliking to Stewart, and denied him his deserved promotion, Stewart decided to write in a field which interested him, Western history, and would bring him extra income to help support his growing family.  As he said, “What did I have to lose?”  So he would NOT write arcane books about punctuation in Elizabethan English or some such.  Instead he wrote the best history of the Donner Party ever published:  Ordeal By Hunger.

Stewart went whole-hog in the research and writing of the book.  He bought a cabin (partly for his family) at Dutch Flat, invited his colleagues from UC’s  history, geography, and art departments to visit, then hiked much of the Donner Trail with the others, using them as on-site references.   (They found – or may have found – one of the most important campfires along the trail.)  He earned sweat-equity knowledge about the great effort required by the Donners to cross deserts, face the Sierra, and endure the storms.   He also studied the books –  like the original diaries of the Donner party members, especially Patrick Breen’s moving pages (now online, here).

The most important result of the field research was Stewart’s great epiphany:  “the land is a character in the work.”  That is to say, it was the Donners’ ignorance of the ecosystems they passed through that caused their great tragedy.

Thus, Ordeal By Hunger can be considered the first ecologically-based history.

The Pioneer Monument itself, and the park, are gifts in large part from one of the most important fraternal organizations in California:  The Native Sons of the Golden West.  The Native Sons, who are organized into lodges called parlors, do a massive amount of charitable work.  One of their charities is a fund to help the healing of those with cleft-palate; the other is the support of California history through the acquisition, protection, and memorializing of events of the Gold Rush and similar milestones.  (The term “The Golden State” comes from the first historic plaque they placed .)  The NSGW built the Monument, and donated it and the land on which it sits, to be the foundation of Donner Memorial State Park.  It was only one of many such gifts from the Native Sons  – others include Sutter’s Fort and the Petaluma Adobe.

The re-dedication of the Pioneer Monument on its Centennial was worth the trip – especially since it included the chance to drive Historic U.S. 40 over Donner Summit to (finally!) see and photograph the George R. Stewart Peak Interpretive Plaque on the Summit. (Placed with the help of another fine organization, the Donner Summit Historical Society.)

At Donner Lake, The weather was cold, the wind intense, and the noise of wind and Interstate 80 drowned out most of the re-dedication speeches.  But there was a chance to speak with some of the local history people and view the NSGW booth.  A highlight was meeting some of the descendants of the Donner Party, history brought to life.

One of the Visitor Center people, when asked which of the several Donner Party histories to buy, said the park usually didn’t recommend Ordeal By Hunger.  He also said it was far and away the largest seller.  That, of course, is what counts, especially since Stewart’s book is still the best history of the Donner Party.

A century after the Native Sons of the Golden West donated money to create the Pioneer Monument and 82 years after the publication of Ordeal By Hunger the Centennial re-dedication of the Monument reminds us to re-read Stewart’s book; and, as time and weather permit, to travel to Donner Summit on U.S. 40; and Donner Lake which sits below George R. Stewart Peak. There, one can reflect on the land, the Donners, and those who memorialized them – like the Native Sons of the Golden West and George R. Stewart.

In the late 1920s and early 1930s, George R. Stewart found himself at the mercy of a new Head of the English Department.  Department Head Montague and Stewart did not get along; and Montague refused to give Stewart a promotion he’d earned.  In hindsight, it was a gift – Stewart turned to writing outside the traditional field of English because he needed the extra income.  (It took an underground effort by several of Stewart’s colleagues to get him his promotion; GRS did not know of their efforts until Oral Historian Suzanne Riess told him about it decades later.)

Stewart  went on to become the star of the Department, writing bestseller after bestseller, inventing new kinds of literature, teaching well, and helping with Department and Library work.  He had an independent, somewhat crotchety view of Department and University affairs; so he was surprised when the Department of English asked him to write its history,for the University’s Centennial in 1968.

The Department of English of the University of California on the Berkeley Campus is a remarkable consideration of what makes an English Department good, or not good, based in large part on a discussion of the personalities of the Berkeley Department.   It is thus part history, part biography, part educational philosophy, part poetry.  As expected, the history is beautifully written, in Stewart’s usual fine style – which itself, with its restrained tone, reflects the methods of earlier days in the Department.

The ideal English professor, Stewart once wrote, is a political liberal and an educational conservative.  The professor must have a ‘generous and tolerant’ – that is, “liberal” –  attitude toward books, and work  to conserve the literature of the past as a repository of the values of history.  He viewed the curriculum as a hearth – lovely image – around which faculty members gather.

One wonders how he’d feel about the current Berkeley English curriculum, which seems to downplay the work of 20th century American authors, like himself – there is no course at Berkeley which considers his work or that of his Berkeley colleagues.  But as he points out in his book, the Department goes through periods of greatness and mediocrity, times when composition for employment takes precedence and times when the idea of literature as the conservator of values comes to the forefront.  And as his own life shows the Department sometimes enters a Golden Age when someone like Stewart breaks out of the mold, changes human thought, invents new types of books, and otherwise shows the kind of work a Department of English OUGHT to be doing.

Golden Ages are rare, and hard to sustain, and Stewart realized that.  So he finished the work by calling The Department of English a testament to The Department in its first century. He wrote, “Few people, I think, will read this small book, and even who those will be, I  scarcely know.”

Writing the history, Stewart  got the last word about the Head of the Department who had kept him from his deserved promotion (and thus propelled him into his writing career).  He described  the years under Montague as the “11 bad years.”   And his description of those years presented a place of fear and suspicion, under the “leadership” of someone almost dictatorial in how he ran the Department.  It’s Stewart’s take on things, of course; but since it was in a Department-approved publication it’s safe to assume that it has truth to it.

The book was elegantly printed by Lawton and Alfred Kennedy, fine printers in San Francisco.  Relatively few copies were printed, so it’s hard to find now.  But for those interested in Berkeley, its Department of English, or the study of English, it’s worth seeking.  For anyone else, it’s a good read, and provocative.