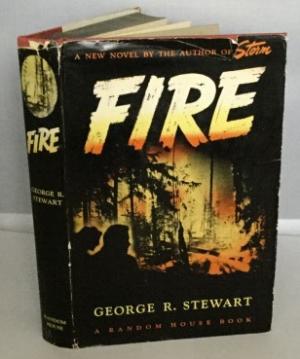 In Fire, George R. Stewart closes his pioneering and page-turning novel with optimism.  The last sentence in the book beautifully describes the serotinous pines – which only set seeds after a hot fire melts the resin holding the cones closed – and the gentle floating to the ground of the coated seeds thus released – seeds which sit in the nutritious ash from the fires until the heat of a future fire melts the coating so the seeds can germinate.

Here’s another version of events post-fire.

John Lucia, GRS follower, has finished his Volunteer Ranger work on the Caldor Fire at Kyburz in the Sierra Nevada Mountains west of Echo Summit,. .  Here is his final report to date, which includes lessons from the experience.

A welcome rain, early this morning.  The air is clean and for the most part, the fire has burned around and not through Kyburz.  Three weeks ago, a small burn near Caldor (from the abbreviation, California Door) has now become almost 200,000 acres.  Six times the area of the county of San Francisco.  It will continue to expand, I am told, for at least another month.   Resin-loaded stumps will burn for weeks.   What was green and pleasing to the eye, will appear as sepia in an old photo.  The forest is exactly the same size and shape, but now only brown, dead, brittle and lifeless.  During the three months of winter, most will lose all their needles.  The beautiful gown that once was, will transform from exquisite to skeletal.  Heads will turn wanting to ignore and put out of their brain, what was imprinted for so long, as a way it always would be.  Like something beautiful slowly aging and dying, this is but instantaneous and more lasting.  Restoration of a forest, with good luck, takes 40 years or more.

Children, family, friends less than a month before came into this cathedral of nature taking it all for granted.  Enjoying the cooling of the shade, the ultra-green hues close and distant, the fragrance of life to be enjoyed with every breath. Now the forest will try to heal itself.   This fire fortunately was mostly slow and was not too hot around Kyburz. Soon, the north facing slopes will show the first indication of life.  Countless evergreen and deciduous trees, millions of seed laden plants and flowers sprouting in the warmth of next spring.  Fighting to survive all competing for the one required resource, water.

If God is kind, the winter will be hard, the snows heavy, the road closed more than usual, the spring late, dogwoods flowering into June.  Maybe even remnant snowbanks over the summit on the three days associated with labor.  Nature fighting to keep us all out as long, as possible.  Allowing us back only when the days are long.  Telling us it needs to be alone.  It needs to heal.  Wounding nature was easy.  It was always vulnerable, it was always there for you, just as you assumed it would be.  We say how much we enjoy our wooded surroundings, but we became complacent, lazy, and failed to protect.  As in any relationship, words are fine, but they alone cannot prove fidelity.  It matters not what you think or feel, actions always speak loudest. You cannot possibly love this land if you don’t at least notice it fighting to survive.

If our forests could speak, it might say, “your abusive, selfish desires may seal my fate”. Thousands of Keep Tahoe Blue stickers, on countless Tundra’s, Sequoia’s, Yukon’s and Tahoe’s do little to maintain the Azul.  What are we really willing to give up to save our relationship with our only home?  We constantly utter words of admiration, but rarely support them with proper actions.  Do we really love to be in nature?  When did camping become a 24-foot-long house dragged along by an F250 diesel?  How can one honestly justify dish tv on their time of being one with nature?  The guaranteed fact is those days and nights in that carbon heavy assault will be quickly forgotten.  The hot shower, the comfortable bed, 140 channels, the climate/bug control, the aluminum ceiling blocking the stars, the frozen food and ice cream, the real half and half for the Starbuck’s coffee and all that makes us believe we are happy.  There was a time, a few short years ago, when tents were only used in time of rain.  Most campers said, it just wasn’t camping inside a tent, and now those in tent’s are “roughing it”.

This is just one of several wildfires burning in the Sierra right now.  The Caldor, with 3000 firefighters, at least 1000 direct support members, I guess 700-800 law enforcement officers make up the human component.  I estimate a ton of line lunches and five tons of bottled water every day.  Over 1500 trucks of all shapes and sizes, a few dozen attack planes and helicopters, around 50 earth movers and with all that, the one thing that can never be supplied, is luck.  If all goes well, the winds are normal we could still be wrestling this burn into October.   Today’s fires start in the spring and continue through Halloween.  Success or failure is measured on structure loss.  I will be forever grateful all our neighbor’s homes were saved.  Over 500 families have lost their home, and many will never rebuild.  A house can be replaced in a few months, but how many will have the desire or ability to wait thirty years to experience the same views from their porch and windows? Most forests on the Pacific slope just never fully recover.  I have witnessed four major fires on the 50 Corridor.  Some leave a small scar, but most expose a sterile landscape, even after 50 years.  People are impatient.  We will bring a house to a forest but are not willing or able to wait for the forest to surround the house.

I don’t know the answer or solution to this problem that affects us all.  I now believe slow moving, control burns done in late fall or early winter may be one of the only ways to bring our forest closer to a natural cycle.  Are we, as a society, capable of budgeting more dollars to action than reaction?

We live in the new age.  The age of the super fire.  Like it or not, we are forced to deal with it.