Here’s the annual re-post of a story of the close connections between George R. Stewart and Jimmy Stewart, and between the mythical town of Bedford Falls and the real  town of Indiana, Pennsylvania – the boyhood home of both Stewarts. 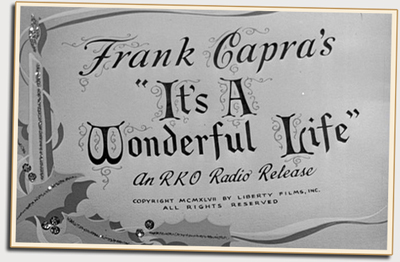 Here’s the annual re-post of a story of the close connections between George R. Stewart and Jimmy Stewart, and between the mythical town of Bedford Falls and the real  town of Indiana, Pennsylvania – the boyhood home of both Stewarts.

This is the time of year when most of us watch the classic Christmas movies.  A Christmas Carol with Alastair Sims, Miracle on 34th Street, A Child’s Christmas in Wales,   (An almost unknown gem, produced in Canada, starring Denholm Elliot); and   It’s a Wonderful Life.     The local theater in Arroyo Grande, California, owned by a man who loves movies, shows one of those classics each Christmas. The admission is a can of food or a toy, to be donated to those in need – in the spirit of the movie.

To see such a film on the big screen, surrounded by local neighbors of all ages – to see how the children love the film – it is a reminder of what we’ve lost.  Today we watch movies on TV, often alone, and usually less intently than in a movie theater.  Yet at a showing of Miracle on Thirty-Fourth Street the audience clapped and cheered when the judge decided that, yes, Kris Kringle was indeed Santa Claus.  How long since you’ve experienced that?

For many people It’s a Wonderful Life   is the Christmas movie.  So those who are George R. Stewart fans will be interested in the connection between that classic film and GRS.

George R. Stewart spent his boyhood in Indiana, Pennsylvania, where his mother’s family lived.  His maternal grandfather, Andrew Wilson,  planned to be a teacher and even helped found a school nearby (it would become the prestigious Kiski School).  But he couldn’t earn enough to support his family so he went into the mercantile business.  He  had a hand in a hardware store there, owned by another Stewart.  That Stewart’s son was James Stewart, also born and raised in Indiana.

George and Jimmy looked alike.  With all the similarities in family history, geography, and physiology, you’d expect they were related.  But they  shared only one possible distant relative.  And they lived in different worlds, in Indiana.  The George Stewarts went to the middle-class Presbyterian church on the flats; Jimmy Stewart and his parents to the upper-class Presbyterian church on the hill.  GRS went to a public high school out west, Jimmy to a prestigious private school in the east.  Their paths apparently never crossed.  12-year-old GRS and his family left Indiana for California in 1905,  the year James Stewart was born. Out west, nothing in their interests or their work brought them together.

Still, the lives paralleled in remarkable ways.  GRS and his family moved to Pasadena; he went to Princeton; and after marriage moved his family to Berkeley, California.  Jimmy went to Princeton, then moved to Pasadena; and spent his life in Southern California.  GRS wrote books, two of which were filmed.  Jimmy made films, like that grand Christmas classic we all love.   GRS worked at the Disney studios for a time, an advisor to Walt himself.  Jimmy worked at many studios, creating characters and stories that touched the hearts of millions.  Ironically, GRS did not like the media, and apparently did not attend movies often, if at all.

Even though their paths never crossed, during the Christmas season we should remember there is one thing they shared:   The experience of life in a small American town in the early 20th century.  Like a trip to Disneyland, a viewing of It’s a Wonderful Life enfolds us in such a place.  For a time, we walk the streets and meet the people of the town and the time where both boys grew up.

Here’s a passage from the biography of Stewart,  about Indiana, Pennsylvania as Bedford Falls:

George R. Stewart’s boyhood town was so archetypically American that it could pass for George Bailey’s “Bedford Falls” in Frank Capra’s It’s A Wonderful Life. In fact, the town was “Bedford Falls” – at least for the movie’s male star. Indiana, Pennsylvania, was also the boyhood home of James Stewart,  “George Bailey” in Capra’s film.   Although the movie’s “Bedford Falls” was built on a studio backlot in the San Fernando Valley, Jimmy Stewart said that when he walked onto the set for the first time he almost expected to hear the bells of his home church in Indiana.

Although the film’s Producer/Director, Frank Capra, is said to have modeled his mythical town on the upstate New York town of Seneca Falls,  for Jimmy Stewart Indiana, Pennsylvania, where he and George R. Stewart grew up, was the place he had in his heart as he brought George Bailey to life.

Each year, Indiana holds an It’s a Wonderful Life Festival, with a parade, hot chocolate,  tree lighting, and continuous showings of the film at the Jimmy Stewart Museum.  It’s a winter festival so the people lining the streets in their warm clothing bring life to a snow-bound town, like the movie brings life to the streets of the movie set town.

As you watch Capra’s great film this Christmas, keep in mind that GRS celebrated his Christmases in a town which for another Stewart,  Jimmy, was the model for iconic,  Bedford Falls.

Merry Christmas to all. 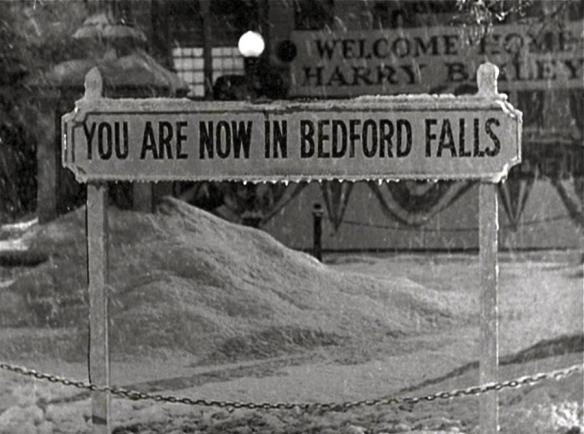 Carl Jung is supposed to have said that there are no accidents.  If an important encounter seems beyond coincidence, Jung is certain it is NOT a coincidence.  Jung even coined a term to describe such encounters:  “synchronicity.”

There have been many Jungian synchronicities in my George R. Stewart work.  Consider today’s extraordinary encounter.

There’s a small cafe here in the care center where I’m sequestered while antibiotics are poured through the system. Today was the day I was supposed to leave, but the antibiotic infusions have been extended.  Deciding to to celebrate anyway, with real coffee, I went to the cafe.

A couple came up to the counter, ordered some items to go, saying they’d been visiting a friend here but had to rush back to San Francisco.

Always neighborly, I asked where in San Francisco they might be going.

“Sure, I know Solano. Friends live there.”

On impulse I asked, “Have you read Earth Abides?” (The book is set in Berkeley up the hill from the Solano neighborhood.)

“Have I? I grew up in Berkeley, where it’s set.

“In fact, I’m Carl Sauer’s granddaughter. My mother was his daughter.  GRS and Granddad were great friends.

“I saw him almost every week hen I was a child”

“George Stewart – he often came to visit my grandfather when I was there.”

She was a member of a family of academic royals, and it was an honor to shake her hand (and her husband’s).

Sauer was considered the greatest geographer of his time.  He had a profound influence on Earth Abides, since GRS often discussed the effects of the removal of humans from the ecosystem with him — a major theme of the pioneering novel.  Stewart acknowledged his debt to Sauer by mentioning him in Earth Abides.

Stewart took also Sauer on research trips to the place that was the focus of his final ecological novel, a place he called Sheep Rock.

At the end of the novel, Stewart steps out of the text to explain how he did the research:

I, George Stewart, did this work…

I have looked into the blue and green depths of the spring, and have climbed  the rock, and gazed out across the desert. That first night, the grim fascination of  the place rose within me, and I thought of this book.

That time I was with Charlie. I was there again— with Jack, with Selar, with Carl and Parker and Starker, with Brig and Roy. I said to myself, “I shall know more about this place than anyone knows of any place in the world.” So I took the others there, and one looked at the beaches and the hills, and another at the grass and the shrubs, and another at the stone-work among the hummocks, and so it went, until at last each had shared with me what he knew. Besides, I read the books.

But if you ask me, “What is true, and what is not? Is there really such a place?” I can only say, “It is all mingled! What does it matter? In the end, is what-is-seen any truer than what-is-imagined?” Yet, if you should look hard enough, you might find a black rock and a spring—and of the other things too, more than you might suspect.

The couple had to leave. I gave them my card, silently wishing we’d met when the biography was being written – her story would have been as valuable as Baiba Strad’s or those of the Stewarts.

This is the type of encounter that makes one believe the gods – or at least Carl Jung – are at work in our lives.