A call to arms – something I usually avoid – but Google Books has put the biography of George R. Stewart on the web without a by-your-leave or any compensation.

I suppose it could be argued that this act of piracy and theft of years of hard work is justified as a kind of payment for g-mail and Google search.  However, with no permission requested or given it seems to me to be a violation of copyright.

I’ll be pursuing this with the publisher and my agent, and will keep the readers of this weblog posted.

Now, back to the regular posts, celebrating George R. Stewart and his work.

PS, 3 days later:  After doing some research, I’ve discovered that such posting of a work online is legal – in the pro-corporate USA (not in Europe).   But they have only posted the first 19 pages or so, so in way it is simply an appetizer.  Who knows?  Maybe it’ll sell a few books.  Still, Google should be required to have the author’s permission to post a work still in print.

USA Today has run a front-page article announcing that names used for last year’s devasting season have been retired, never to be used again.  If the newspaper, or those who killed the names for storms had done any research, they’d have learned that Maria stands apart for all storms and should have never had her name retired.

Maria was the name George R. Stewart had his Young Meteorologist give the tiny storm he was tracking.  Maria would grow into a hearty adulthood, reshaping the human and natural world over the twelve days of her life.  She was a West Coast/Sierra Nevada version of a great hurricane.  Her interaction with humans gives his fine novel its ecological focus and can’t-put-it-down drama.

Stewart’s naming of the storm was an idea borrowed from Napier Shaw.  (Always ethical, GRS admits it in the beginning of the book.) 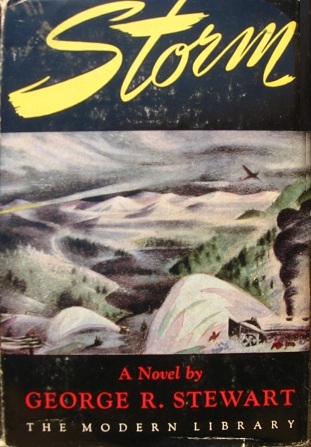 STORM is the book that gives us the practice of naming storms.The book was widely-read, especially the WW II paperback version issued to GI troops, (The GI version had the kind of racy cover encouraging young men to read it in search of the action the cover promised.)  After the war, some of the military  readers – Vic Moiteret comes to mind, since he eventually became “Chief Areologist” (Meteorologist) for the Navy and had influence – and the idea was adopted as a formal practice.

Be reassured!  Stewart’s Maria has NOT been put to death.  If the World Meterological Organization or the national  fishwrap had bothered to do some research they would have discovered that the first named storm, the one which gave us the practice of naming storms, is NOT “Maria,”  “Mar-ee-a.”   It’s “Maria” – pronounced, as GRS puts it, in the old-fashioned way, with a long i:  “Mar-eye-a.”  Since Walt Disney filmed the novel for TV and Lerner and Loew “borrowed” the name for one of their best-known songs,  Maria will thrive whether the WMO puts their Maria out to pasture or not.