If you were one of those people who jumped at the chance to buy The Life and Truth of George R. Stewart:  A Literary Biography of the Author of EARTH ABIDES, count yourself lucky.  The price has gone up again – it’s now selling for about $17.00.

Still, that’s about $12.00 less than its previous high price.  So if you’re motivated, take a look at the Google Play books listing here.  Thanks.

George R. Stewart opened Ordeal By Hunger, in 1936, with a look at northern Nevada from a 200 mile high orbit – and described the scene so perfectly that when Astronaut Ed Lu, of ISS Expedition Seven, photographed it,  Stewart’s words and Lu’s photos matched precisely. In Storm, Stewart ended the book with a view from Venus, in which his imagined watcher from that world saw no sign of storms disturbing our world. In both these books, Stewart – perhaps not realizing it, or perhaps realizing it, was preparing for that great event that took place 47 years ago today:  the First Step on another world.

Working for NASA, and working with Star Trek artists,  I’ve been honored with some exceptional gifts that memorialize that great day.  I’ll celebrate by contemplating a wonderful gift given by Mike Okuda and another gift from NASA education days. 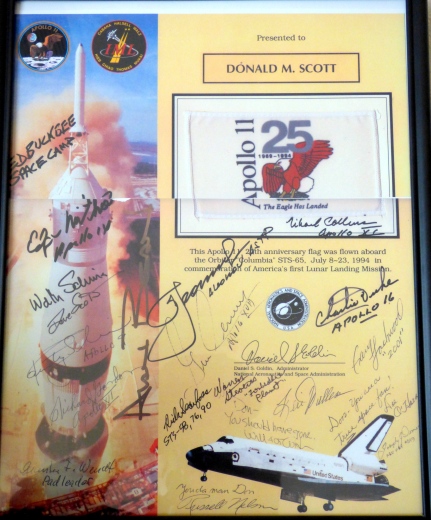 Take a moment, if you will, to honor those heroes, and all those who supported them, and the artists who inspire us to follow that dream.  Artists like Mike Okuda, Rick Sternbach, Doug Drexler,  Chesley Bonestell, David Hardy, and so many others, who fire our imaginations to design and build ships to explore other worlds.  And literary artists like George R. Stewart, who prepared us wonderfully for that First Step.

By the way, NASA has restored the entire 3+hours that Armstrong and Aldrin spent on the moon on Apollo Day I.   You can see it or download it here:

George R. Stewart’s last great book was Names On The Globe.  He wrote another names book, American Given Names, before he died, (see earlier post about  that book) but it was a dictionary and history of selected American names.  Names On The Globe, like his classic and never-duplicated Names On The Land, was a history of place-naming – in this case, on a global scale. Here, in the last post about one of Stewart’s major publications, is a short essay about the book.

As in Names On The Land, Stewart has created a rich, complex, and deep – but easily understood – history of the process of place naming and of eras of place naming.  Although it is supposedly about global naming, for many obvious and practical reasons GRS focuses on names in the areas we then called “western civilization.”  He was not a Chinese or Japanese scholar, nor an African one, nor one who knew much of Aboriginal languages and culture.  So he stuck with what he did know, with some brief chapters and comments about other regions of the world – assuming, probably, that others who came after him might add deeper histories of the naming in those places.  Another reason for emphasizing “Western Civilization” is that he spoke or read many Indo-European languages, and had studied the history of most Indo-European countries (save India), so he could do the scholarship necessary to tease out the story of those names.

He takes a different approach to understanding place naming in this book, beginning with an examination of Man as a Namer.  No recorded human society is without names.  Some have evolved, GRS says, and others were bestowed.  That is, in finding a previously unknown river its name “new river” evolved from the name of the original river.  But Tamsen’s Town was a name that would have been bestowed on a place by settlers of travelers.

GRS continues by considering the mind of Man the Namer, as he explains the types of place names given, and the reasons for giving them.  Some places, for example, were important to the namers because of incidents that happened there (Colt Killed Creek), others show possession  (Wassa’s Town, Washington),  others commemorate great (or small) events (Washington’s Crossing), and so forth.

In Part III, the longest section, GRS describes the names and naming in various places around the globe.  In discussing Celtic names, in modern Europe, he points out that they were so well-connected with the land that they outlasted the names later given by the Romans, even if in altered form.  But, as he points out, some of the “Celtic” names were probably originally given by earlier settlers.

Part IV is especially interesting, as Stewart considers important uses for ancient names – as tools for archaeologist, historians, and other scholars.  Fittingly, since Stewart was, after all, a poet who wrote prose, he ends with a chapter about place names as useful tools for poets. “…The romantic appeal springs from sonorous syllables, and from a sense of the strange, bizarre, and wonderful. …” Stewart writes, noting that the poet or author needs not to know the meaning of the name to use it in his work.  He quotes several famous poets who are known for the excellent use of such names, mentions Stephen Vincent Benet’s American Names.  And he quotes, appropriately, the beautiful opening of his own Names on the Land, where he lists the wonderful names found here – Gunsight Pass, Lone Pine, Broken Bow, Roaring Run, and the others.

He finishes the book, as he sometimes finished his works, with a reflection on even the most prosaic seeming of names, Cowbridge.  Did a cow fall from the bridge?  Or refuse to cross?  “….even the simple Cowbridge stirs the imagination,” George R. Stewart writes, as he finishes his great work.

The Author’s Note brings that work to a close.  He will finish and publish his book on American given names, but this, he knows, is his last great work.  So he honors his greatest friend, his wife, Theodosia, “who,” he writes, “might well be given the title Encourager of Books.”

And, thus, Opus Perfeci.  For this study of the books of George R. Stewart, and his life, and related topics.  Depending on what may come, I plan to add more as things of interest show up.  And since Stewart wrote of Earth from the view of space, ground, ecosystem, language, history, literature, and so on, I still have a broad canvas to draw on.

In the meantime, many thanks to all of you – from nearly 60 countries, in every continent save Antarctica at last count – who have visited this site, read the posts, commented on them, and encouraged the work.  You have been an inspiration.