As the days in the northern hemisphere begin to grow longer, it’s a good time to review the year of this weblog.  Fortunately, WordPress makes that easy by setting up a page which reviews log activity – number of posts, number of visitors, number of comments, where the visitors are located, and  sites referring them.  I’ve made the page public so you can see how your involvement has helped make the writing rewarding.

It is particularly interesting to me that the posts have been read by people in 49 countries.  If I were a numerologist, I might comment that the number 49 has great significance:  Earth Abides, Stewart’s great work, honored by Philip Aaberg’s music and author James Sallis’s essay, was published in 1949.   Since the novel has never been out of print, that’s 66 years of good reading for that one book alone.

One highlight of the year was the chance to travel old U.S.40 with Frank Brusca as he re-photographed sites for Stewart’s famous book about the highway.

Another, related, highlight was the successful sponsoring of an interpretive sign on old US 40 at Donner Summit about Stewart.  The sign was successfully sponsored by several friends of Stewart’s work, and designed by Bill Oudegeest of the Donner Summit Historical Society.

With luck, another honoring and educational effort will be finished in early 2016.  Sponsors are donating the funding for the publication of the sheet music for Philip Aaberg’s  “Earth Abides.”

The weblog also brought connections with novelist Christopher Priest, whose award-winning novel The Prestige was filmed with Hugh Jackman and Christopher Bale in starring roles, and Junlin Pan, a Chinese scholar working at an Illinois University, who’s translating Names on the Land into Chinese for one of the largest publishing houses in China.  I had the great pleasure of discussing Stewart’s work with Christopher Priest; and the similarly great pleasure of helping Junlin Pan with some of the more esoteric references in the footnotes to Stewart’s names book.

It’s been a good year for this weblog, and I thank all of you who’ve been following it, and especially those commenting on the writing.  May all of you have a Happy New Year, and a good 2016.

This is the time of year when most of us watch the classic Christmas movies.  A Christmas Carol with Alastair Sims, Miracle on 54th Street, A Child’s Christmas in Wales,   (An almost unknown gem, produced in Canada, starring Denholm Elliot), It’s a Wonderful Life.

Here in Arroyo Grande, the local theater,  owned by a man who loves movies, shows one of those classics each Christmas. The admission is a can of food or a toy.  This year, it was the venerable old classic about Kris Kringle, the old man who thinks he’s Santa Claus – and maybe is – and restores the faith of others in the spirit of Christmas.  To see that film on the big screen, surrounded by local neighbors of all ages – to see how the children love the film – it is a reminder of what we’ve lost, as we watch movies on TV, but less intently – a kind of a digital sampling of the films.  Like a CD, we miss much when we do that.  But in the theater, yesterday, we missed nothing.  And – how long since you’ve experienced this? – the audience clapped and cheered when the judge decided that, yes, Kris Kringle was indeed Santa Claus.  It was a great, traditional, American Christmas experience.

For most of the people I know, It’s a Wonderful Life   is the Christmas movie.  So those who are George R. Stewart fans should know about the connection between that classic film and GRS.

George R. Stewart was raised in Indiana, Pennsylvania, where his mother’s family lived.  His maternal grandfather, Andrew Wilson,  planned to be a teacher, and even helped found a school nearby (which would become the prestigious Kiski School).  But he couldn’t earn enough to support his family; so he went into the mercantile business.  He  had a hand in a hardware store there, owned by another Stewart.  That Stewart’s son was James Stewart, also born and raised in Indiana.

George and Jimmy looked alike.  With all the similarities in family history, geography, and physiology, you’d expect they were related.  But they  shared only one possible distant relative.  And they lived in different worlds, in Indiana.  The George Stewarts went to the middle-class Presbyterian church on the flats; Jimmy Stewart and his parents went to the upper-class Presbyterian church on the hill.  GRS went to a public high school out west, Jimmy to a prestigious private school in the east.

Still, the lives paralleled in remarkable ways.  GRS and his family moved to Pasadena; he went to Princeton; and after marriage moved his family to Berkeley, California.  Jimmy went to Princeton, then moved to Pasadena; and spent his life in Southern California.  GRS wrote books, two of which were filmed.  Jimmy made films, like that grand Christmas classic we all love.   GRS worked at the Disney studios for a time, as an advisor to Walt himself.  Jimmy worked at many studios, creating characters and stories that touched the hearts of millions.  But, ironically, GRS did not like the media, and apparently did not attend movies often, if at all.

Their paths apparently never crossed.  GRS and his family left Indiana for California in 1905, when he was 12.  That was the year James Stewart was born. Out west, nothing in their interests or their work brought them together.  Since the film we now consider a classic failed in its initial run, it is unlikely GRS would have seen it even if he did go to the movies.

Yet, in this Christmas season, we should remember there is one thing they shared; and thanks to the film, we all share it with them:  The experience of life in a small American town, in the early 20th century.  Like a trip to Disneyland, a viewing of It’s a Wonderful Life enfolds us in such a place; and, for a time, we walk the streets and meet the people of the town and the time where both boys grew up.

Here’s a passage from my book about Indiana, Pennsylvania, as Bedford Falls:

George R. Stewart’s boyhood town was so archetypically American that it could pass for George Bailey’s “Bedford Falls” in Frank Capra’s It’s A Wonderful Life. In fact, the town was “Bedford Falls” – at least for the movie’s male star. Indiana, Pennsylvania, was also the boyhood home of James Stewart, who played “George Bailey” in Capra’s film.   Although the movie’s “Bedford Falls” was built on a studio backlot in the San Fernando Valley, Jimmy Stewart said that when he walked onto the set for the first time he almost expected to hear the bells of his home church in Indiana.

Each year, Indiana holds an It’s a Wonderful Life Festival, with a parade, hot chocolate,  tree lighting, and continuous showings of the film at the Jimmy Stewart Museum.  It’s a winter festival; so the people lining the streets in their warm clothing bring life to a snow-bound town, like the movie brings life to the streets of the movie set town.

(The film’s Producer Director, Frank Capra, probably modeled his set on the upstate New York town of Seneca Falls; but for the star of the movie, Indiana, Pennsylvania, where he and George R. Stewart grew up, was the place he kept in his heart as he brought George Bailey to life.)

So this Christmas, when you watch Capra’s great film (which, by the way, is playing here today in three nearby theaters), give a thought to the boyhood of George R. Stewart.  GRS celebrated his Christmases in a town which for Jimmy Stewart was the model for that iconic American town, Bedford Falls.

Merry Christmas to all. 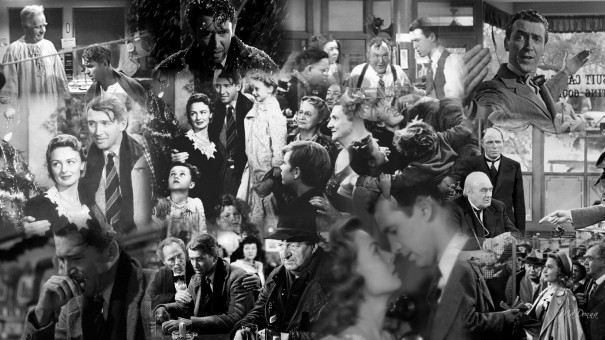