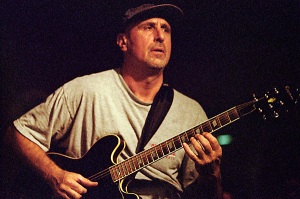 At about the same time I was discovering George R. Stewart, my brother, Raymond J. Scott, was beginning to study music.  He started with drums; since he was a night person, that meant a few sleepless nights for me.  But Ray quickly moved over to guitar, and became a fine performer.  In high school, he got together with musician friends and they began to jam — again at night.  One day, he invited me to a performance  at “Sean’s Dad’s barn” in Clayton, California.  (Sean King’s father, Robin King, inventor of the Nagra tape recorder and famous for his mellifluous San Miguel Beer commercials, retired and bought a campground — with a barn — in the farm town of Clayton.)  I went, paid a buck; then listened, impressed, to the group’s version of the Grand Old Opry.  Ray and his friend Jerry were the lead act, and did a fine bluegrass set.

If I had only had a camera or a recorder — it was, I believe, Jerry Garcia’s first public performance.

The number entitled “Instrumental” is a fine showcase for Ray’s talent.

Ray has made his living as a composer and performer for many years, moving from rock to jazz to Salsa to Latin jazz.  Along the way he’s been invited to perform at the Ahwahnee in Yosemite Valley, flown to Paris to play for the Millennium New Year’s eve, and been a member of the 49er football team band.

You can order those CDs from: http://www.cdbaby.com/Artist/AnnaEstrada

Anna (and Ray’s) latest CD will premiere this July.  It’s entitled Volando and should be widely available. 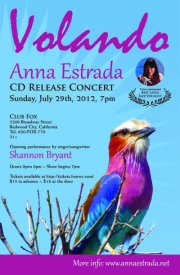 George R. Stewart was a bit of a musician himself, playing the old songs of the westering on his accordion.  He even joined Carl Sandburg and a couple of folk song collectors for a fireside songfest one night, in the Stewart home on Codornices.   Ray and GRS both shared one great truth:  Music, in many ways, is the key to all the arts.  It’s been an honor, and a great lesson, to know them both.

One of the joys of researching a book like the George R. Stewart biography is finding unexpected roads to explore, and great discoveries along those roads.

Searching Google to buy a copy of Sheep Rock last night, I found one of those paths:  a link to a page about the artist who designed the cover.  E. McKnight Kauffer was a native Montanan who eventually moved to England, where he designed a large number of posters for the Tube, the Railroads, Shell Oil, museums, and so on.  The posters are designed for quick impact, but are also beautiful.

Here’s a Google page with many of Kauffer’s designs — Sheep Rock is a few rows down, on the left:   https://www.google.com/search?q=E.+McKnight+Kauffer&hl=en&prmd=imvns&tbm=isch&tbo=u&source=univ&sa=X&ei=KRzWT9T6L4iA2wW9y92yDw&ved=0CHkQsAQ&biw=1280&bih=672

Kauffer did a number of book cover designs.   Looking over his designs, I find myself wondering if he did any of the other original Stewart covers – like Names On The Land, Earth Abides, or Storm.  If not, I’m wondering who may have designed the other Stewart covers.

Osborne did the cover for Not So Rich As You Think — he was well-known for his style and so his name was showcased in the book.

But what about the others?  Anyone have any ideas?

Big Roads, by Earl Swift, is a fine history of the US highway system as it evolved from mud trails to interstates.   Along the way, the system changed from privately developed named highways like The National Old Trails Road and the Lincoln Highway to the federal/state U.S. Highway system (the Route 66 era) before it became today’s interstate system.  The book describes how the hard work of dedicated engineers and community leaders – sometimes in conflict with each other – resulted in both a fine highway network AND a growing realization of the human and ecological cost of highways.

Although George R. Stewart wrote several of the first American Highway books, including U.S. 40, he isn’t mentioned in Swift’s book.  But his ideas — that highways should travel through rather than over the land, and that travelers benefit by visiting  the communities along the old highways, a mile or two from the offramp (an idea taken up beautifully by William Least Heat Moon in Blue Highways and embellished, with the help of Frank Brusca in Roads to Quoz) — are similar to the ideas Swift lays down in his  last chapter.

a good read, and highly recommended for anyone interested in the history of the American roads, or any traveler driving those roads.

A good review of Earth Abides is on the “365 Days of the Book” blog at Antioch University of Los Angeles’ web log.   Worth reading here:  http://aulalibrary365.wordpress.com/2012/03/03/earth-abides-by-george-r-stewart/